Athletes of the Month 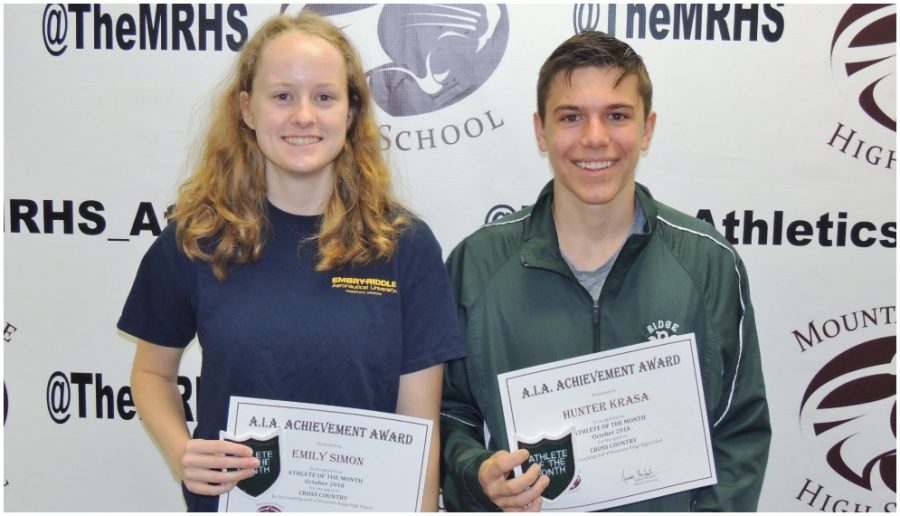 Hunter Krasa is a junior who runs cross country. Because of his speed and his helpful and kind attitude towards his teammates, he has been honored as male athlete of the month. His 5k PR is a 15:33 and is ranked 3rd in division 1. He is the fastest runner on the cross country team and number one at our school, a high achievement for a junior. He doesn’t let his sport interfere with his grades because he takes every opportunity to do his work on his free time. According to Krasa, he also manages to have a social life because he makes friends while he runs. He is honored to receive this award, stating that it was a complete surprise when the coach told him.

Emily Simon, a senior here at Mountain Ridge, takes not only the number one spot on the Ridge cross country, but athletes of the month. She is truly in awe and honored to be a recipient of this award.

“The coach said that I won because I run fast, but I am also helpful and uplifting to the JV runners,” Simon said excitedly.

She has a PR of 18:55 and is ranked 5th on the varsity boys team. She is all set and ready for college and will be attending Embry Riddle next school year alongside her sisters. She has gained a few scholarships from cross country and is ready to see what happens next for that path.