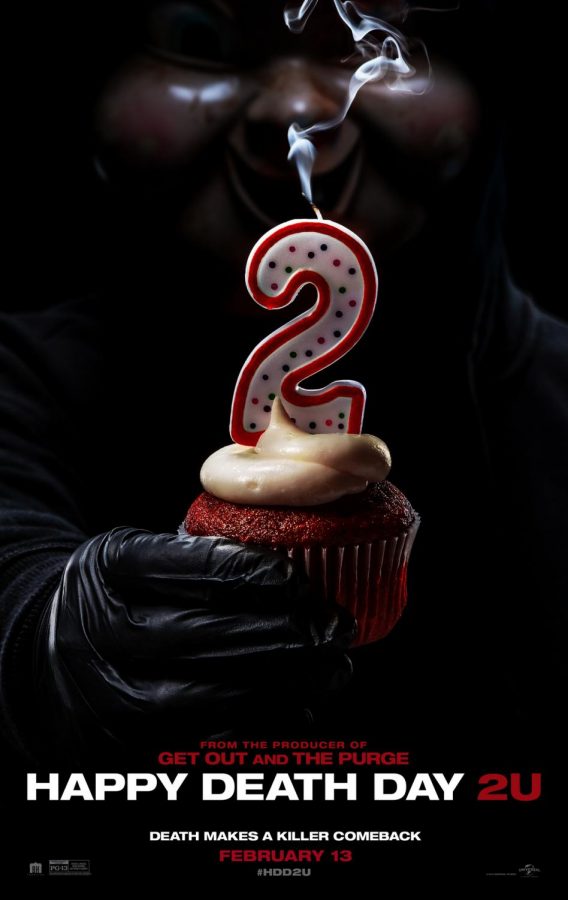 Happy Death Day 2U, the sequel of the box office hit Happy Death Day, is a comedic horror movie starring Jessica Rothe as the main character, Tree Gelbman. The movie mostly takes place on a typical college campus, but the settings shift throughout the movie. I believe this movie was better than the first one, and deserves to be given a chance.

Tree Gelbman, the main character of the movie, wakes up in her college dorm room in a parallel universe. Every time she dies, she starts the day back over, much like the first movie. Instead of her being the main target, it is her boyfriend Carter’s (played by Israel Broussard) roommate, Ryan (played by Phi Vu), who claims that he is dying and starting the day over and over again. This brings Tree deja vu, and she finds out that it is now everyone being targeted, and not just her this time. To save everyone, she must keep dying, but instead of letting the killer get the satisfaction of killing her, in several instances, she kills herself. She does this by shooting herself, jumping out of an airplane without a parachute, and driving her car into walls.

One aspect of filmmaking that the directors did really well was casting the right actors/actresses. Jessica Rothe played the role perfectly. Every time she would wake up after she died, she would become madder and sometimes it actually seemed real. For example, at one part she gets so mad that she starts screaming at her fellow classmates, throwing their books everywhere. She played this very well, and it seemed like she was actually aggravated.

Another aspect of filmmaking that this movie succeeded in was the set design and camera work. At some points in this movie, the camera angles really complemented the set design. Near the end of the movie, there are mannequins with the Babyface mask that the villain wears everywhere. This shot looked astounding because of the camera angles. It made the shot a lot more dramatic and led the audience to wonder what will happen next.

Overall, this movie was decent. I wouldn’t cancel all my other plans to go see this movie, but if you have some extra time, I recommend watching it.