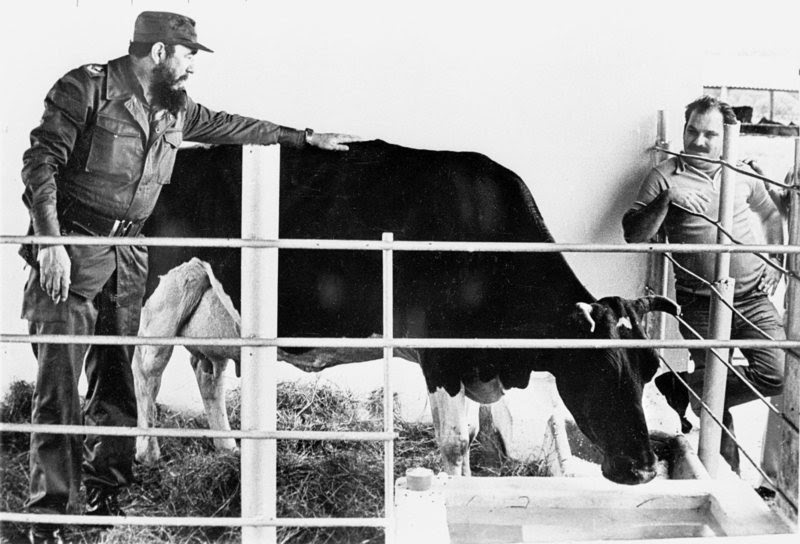 Casto with his cow Ubre Blanca

We all know the phrase “I scream, you scream, we all scream for ice cream!” In history, Fidel Castro was one of many people who said that phrase the loudest. According to multiple people who have done interviews, or spoken to Fidel Castro, noticed that Castro would eat eighteen spoonful’s of ice cream along with his breakfast meal, and would drink multiple milk shakes and consume other dairy products throughout the day. There have also been CIA assassination attempts to poison Castro’s milkshake. So, how did this all start?

According to historians, Castro had been obsessed with dairy throughout his life. For a typical meal, Castro will consume two pints of ice cream on top of his meal. Castro was so obsessed with milk, that he had one of the largest ice cream parlors constructed on an entire city block in Havana. This parlor was named Coppelia and it’s still opened today and is widely popular for its wide variety of ice cream flavors.

In 1963, an assassination attempt was carried out by the CIA to poison Castro’s chocolate milkshake. A poisonous pill was hidden inside of a freezer where the assassin will return to get it when the milkshake is being prepared. However, the pill froze to the wall of the freezer. When the assassin came to get the pill, he broke it in half while trying to pry it off the freezer wall, making it completely ineffective. Historians consider this moment the closest anyone has ever gotten to assassinating Castro.

There was one problem when it came to the production of milk in Cuba. Their native cow was unable to produce enough milk to satisfy Castro and the public’s needs. Castro decided to purchase Holstein Friesian cows from Canada. He chose this specific breed of cow because they are able to produce the most amount of milk in a short amount of time. When the cows arrived in Cuba, the cows were under a lot of environmental stress because of the Cuban tropical climate. To fix this problem, Castro ordered the construction of multiple habitat facilities with air conditioning and other habitat needs. The Holsteins were still under constant stress from being compacted into a small facility. This caused less milk to be produced than usual. Castro then ordered his scientists to cross breed their native cow with the Holsteins.

After numerous attempts to breed a cow that will be resistant to tropical climate stress, and produce a lot of milk. One cow was born that surpassed the scientists’ expectations. The cow was given the name Ubre Blanca which translates to “White Udder”. Ubre Blanca quickly became a Cuban phenomenon after producing 100 quarts of milk a day (25 gallons) more than four times the average production. In a year, Ubre Blanca would produce 36,500 quarts of milk (9,125 gallons).

Ubre Blanca’s habitat facility would be well air conditioned and cleaned regularly throughout the day. Castro himself would visit Blanca regularly for media coverage, or just to visit his favorite cow.

Urbe Blanca would be portrayed in Cuban media as “the superior cow.” Castro referred to Blanca as evidence of communism’s superior breeding skills. Oftentimes, regular moments from Blanca’s daily life would be published in the Cuban newspaper.

After thirteen years of producing high quantities of milk, Ubre Blanca was euthanized because of old age. Blanca was commemorated in the Cuban newspaper with a eulogy and the contributions the cow made to the communist party. Taxidermists stuffed Ubre Blanca where it will be put on display at the National Cattle Health Center outside of Havana. There have also been attempts to clone Urbe Blanca, however there was no progress or any breakthroughs in the cloning process.

Castro continued his life living off of his favorite foods and a whole lotta dairy. Historians mock Castro’s milk obsession by either calling him “Calcium Castro” or “The Milk Dictator”. The Coppelia ice cream parlor is still open today and serves some of the best ice cream in the east indies. Castro’s obsession also gave birth to one of the most efficient cows of all time.