Planned Obsolescence and Why It Needs to Go 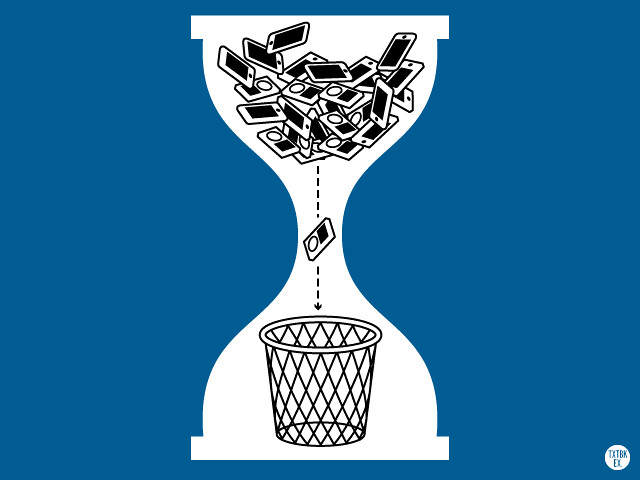 For the land of the free, capitalist greed sure has an iron grip on us all. Why else do we continue to allow the amoral practice of planned obsolescence?

Planned obsolescence, or when a product’s expiration is pre-planned, is a dirty business tactic that has gone on for far too long. It’s cost the world’s pockets dearly, and yet most of us continue to buy into the systemic forced consumerism.

I won’t say that new products are a bad thing; far from it. In fact, I love the new gadgets that tech companies like Apple, Samsung, and Google come out with every year, and doesn’t everyone? New products excite us–they’re fresh and shiny and totally different from previous versions of the same model (wink wink).

What I don’t love, however, is the fact that big brands thrive off of planned obsolescence. It’s the reason they’ve survived so long. After all, why would we buy new products of virtually the same items if our original products worked fine? Sure, an updated model of an old phone would still be popular and new features are always great, but that doesn’t mean we need them.

Thus the crux of the issue and why planned obsolescence was created in the first place: why would someone buy a newer version of the same product just because it’s new?

Planned obsolescence capitalizes on consumers’ willingness to get the best product out on the market, and if their current product isn’t working well, there is a higher chance that they’ll invest into a newer product. By pre-planning a product’s lifespan, companies are guaranteeing returning customers.

Take the latest iPhone, for example. If you’re paying over $1,000 for a phone, you would expect it to work as long as you need it. However, if that was the case, Apple wouldn’t make nearly as much money as they do now. Therefore, they plan on having their phones conveniently slow down after a few years. Similarly, they also change the design of the iPhone with each new model. One of the iPhone 12 models had two cameras stacked one on top of the other. One of the iPhone 13 models, on the other hand, also has two cameras, but they are spread diagonally. So different and ingenious, right?

Even now as I’m writing this, my iPhone is nearly dead after a few hours of usage. This strikes me as odd, considering how only a few months ago my phone battery would last for an entire day. Surely it’s a mere coincidence that the latest line of iPhones was released only a few short weeks ago?

Fast fashion is yet another example of planned obsolescence. Companies like Shein or Forever 21 produce large quantities of clothing, and though their products may be cheaper, they don’t hold up for a long time. In fact, fast fashion products make it so that it’s necessary to buy more clothing in order to maintain a wearable wardrobe. Thus, the cycle continues.

It’s no secret that planned obsolescence is a byproduct of capitalism and promotes perpetual greed. What is curious, however, is how we as a society have allowed it to continue for so long. In order for society to grow beyond this thinly veiled system of corruption, we must work together to hold companies accountable for their purposely faulty products.