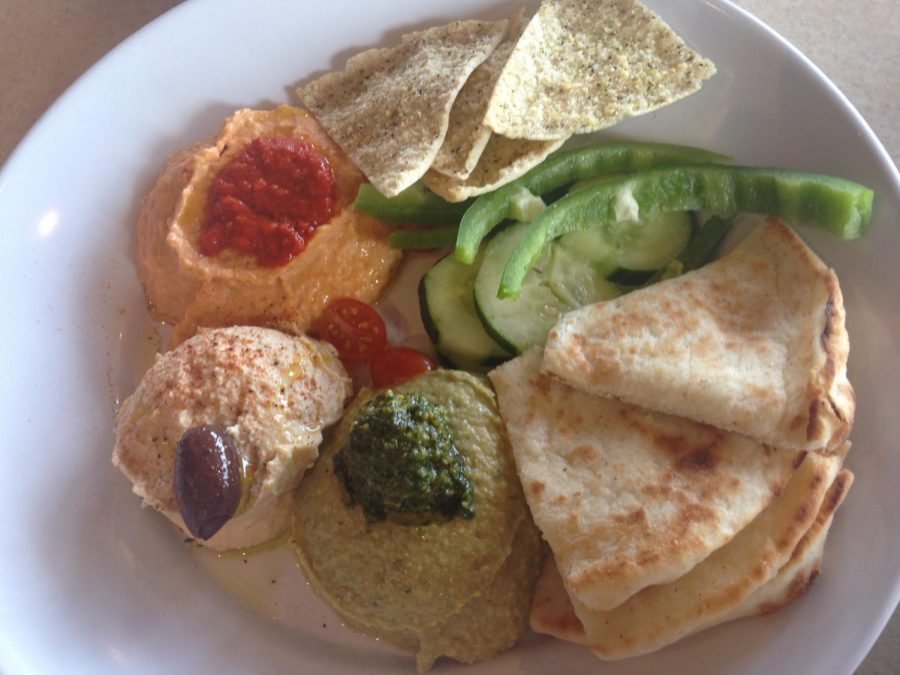 Zoe’s Kitchen is a fresh and trendy Mediterranean

restaurant that is new on the scene in Glendale. I had the pleasure of visiting the restaurant this weekend and was not disappointed.

Zoe’s Kitchen is crisp and colorful, with uptempo indie music playing in the background. The restaurant is decorated in a mix of 60’s mod and organic farmers’ market, which makes for a cool atmosphere that can be enjoyed by all. During my visit, I noted a student studying in the quiet corner booth, a young family with a baby, two elderly couples, and a group of hipstery teens passing a phone around the round table beneath the spherical light fixtures. It is well lit by large windows and young students’ art lines the walls of the entire restaurant, which can be purchased for a $20 donation. The little details, like real silverware and plates, house made dressing on each table, and real water cups that didn’t have to be refilled after two sips elevated the scene.  Overall, the vibe was trendy, youthful, and clean.

At Zoe’s Kitchen, customers order their food and pay at a counter and the food is brought to the table. I ordered the hummus plate as a starter, which came with 3 types of hummus: basil pesto, harissa, and classic, as well as pita bread, pita chips, and vegetables to dip. The hummus was light and nutty, the pesto basil being my favorite. The vegetables were fresh and the pita was homemade and fluffy. A perfect way to start the meal.

I followed the starter with two entrees; the steak stack and chicken roll-ups, with sides of pasta salad and marinated slaw. The steak stack was a sandwich with thinly sliced steak, tomatoes, portobello mushrooms, mozzarella, caramelized onions, and a feta spread on toasted rosemary sourdough. It was fantastic. The caramelized onions, steak, and feta made for rich and satisfying flavors without being heavy. The bread was properly toasted, still soft, but sturdy enough to support the rest of the sandwich. The steak stack had the unique experience of appearing just as good in person as in the menu’s photographs. The chicken roll-ups were delicious too. They were grilled flour tortillas stuffed with well-seasoned white chicken, caramelized onions, feta and tomatoes. The roll-ups were served with a small bowl of salsa, which was underwhelming and unnecessary to the dish. The sides were well done, though the pasta salad, with its sun dried tomatoes and basil, was far superior to the slaw, which would have done better with more dressing or acidity. Both entrees were successful and perfect for sharing.

Zoe’s Kitchen also offers made-in-house desserts. I enjoyed a large lemon cookie, but also had the option of chocolate chip and chocolate cake. The cookie had a good bake on it, with a crispy, sugar coated outside and a soft middle. Despite the size (it was about the size of my hand), it felt light and refreshing. It was a great conclusion to my meal.

The pricing at Zoe’s Kitchen is affordable, especially as it can be easily enjoyed a second time as leftovers. Each entree was less than $10, including sides. There are lots of vegetarian and vegan options and every menu item has a breakdown of their nutrition values on their website. It is clear that fresh and healthy food is a priority.

I definitely recommend visiting Zoe’s Kitchen for lunch or dinner. Between the positive atmosphere, the affordable prices, and the delicious food, this restaurant makes for a new favorite when you crave Mediterranean food.